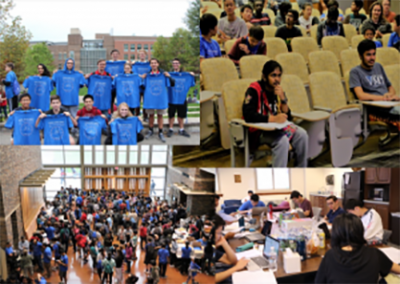 On a cool, cloudy Saturday in early November, 45 teams of high school students from Virginia, the Carolinas, and even three from China came to the Duke Campus to participate in the annual Duke Math Meet.

After a light breakfast, each team was led to a nearby classroom for the two hours of team tests. This was followed by a Jimmy Johns lunch and then three more hours of individual tests in the Bio Sci and Gross auditoriums.

Pravi Putalalpattu and Adam Ardeishar from Fairfax Math Circle in Virginia had perfect scores on the individual round with Adam winning the tie breaker to take first place in the Meet. Jeffrey Yu from Thomas Jefferson high school in Virginia missed just one of the 10 problems. The median score among the 270 participants was 1 point.

Thanks to the scores of Duke student volunteers who graded the solutions, led teams to their test rooms, and helped serve the meals, to Trung Can and Feng Gui for supervising the construction and grading of the contest problems, and especially to Justin Luo for his many hours spent coordinating the Meet.

For more about the 2018 Math Meet click here:  https://sites.duke.edu/mathmeet/