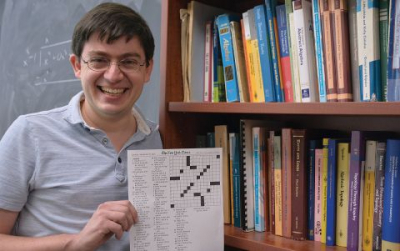 On a Saturday last September, Adam Levine was antsy to get his hands on that day’s copy of The New York Times because of the crossword puzzle. He didn’t have home delivery, and when he ventured out to buy a paper, the newspaper was sold out.

A lifelong fan of crosswords, he had no intention of doing the puzzle. He knew all of the answers. After all, he wrote the thing.

When he’s not researching or teaching topology – the study of shapes of spaces – Levine enjoys the challenge of stitching together complicated knots of words into crossword puzzles. And after having puzzles published online, or in math-focused publications, Levine had his first puzzle appear in The New York Times, arguably the biggest stage for crossword puzzles, on a day reserved for the hardest ones.

“I heard from family and friends, just my whole extended circle,” said Levine, associate professor in the Duke Department of Mathematics. “I even heard from colleagues of mine in different universities, people I mostly communicate with professionally but who noticed it in the paper.”

Levine’s crossword puzzle hobby goes back to childhood. Once, while at summer camp, his grandfather sent him a letter in the form of a crossword puzzle. Around four years ago, inspired by the innovative challenges puzzle makers weave into their works, Levine decided to try making his own. Once he did,
he became hooked.

“Math research is my favorite thing to do, but it can be frustrating and leave you stuck,” said Levine, who has worked at Duke since 2017. “So to be able to get away and have something fun to play with is great.”

He enjoys making puzzles with larger riddles to be figured out once all of the clues are filled in, most of which can be found on his website. In the summer of 2020, he built the one that ended up in The New York Times.

The puzzle’s 68 clues cover a wide range of topics. There’s 33 across, which asks for the 15-letter word for “The site of the impact of the asteroid that killed the dinosaurs 66 million years ago.” For 52 down, the puzzle simply asks for a three-letter word for “Quibble.”

It took roughly a year after its submission for Levine’s puzzle to be approved, edited and published. After that, Levine had to wait a few weeks until his parents visited from New York to finally get his own copy of the puzzle in print.

“It is going to get framed, but it’s been a busy semester,” Levine said.