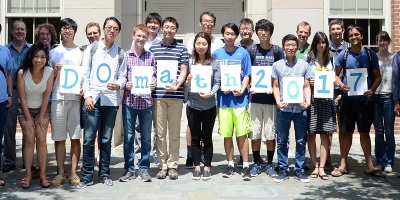 For the 2017 program, there were four DOmath teams. Here are brief advertising blurbs about each; please see the individual links for more detailed summaries of the projects and results.

Simulations of spiral galaxies
As most of the gravity inside galaxies is not due to visible matter, astronomers have become convinced that galaxies are mostly made out of invisible matter, called dark matter. In this project, students will use Professor Bray's spiral galaxy simulator, tweaking it as necessary, to test ideas about the nature of dark matter and the role it plays in spiral patterns in galaxies.

Rational points in orbits of matrix groups
A classic problem in number theory is deciding whether a system of polynomial equations with coefficients in the rational numbers has a solution in the rational numbers.  In this project we will be investigating this question for a family of cases that arise naturally in the context of actions of matrix groups.

Laplacian eigenfunctions and interacting particles
We study algorithms based on random walkers for approximating the eigenfunctions of the Laplacian and their nodal sets. Such algorithms have applications in spectral graph theory and computational quantum mechanics.

Random fragmentation
We will study random algorithms that spread points in various spaces, such as the unit interval, box, and sphere. The project involves both rigorous analysis and implementation of these algorithms. Understanding these algorithms relates to Problem 7 of Stephen Smale's "Problems for the next century."

DOmath 2017 was co-directed by Heekyoung Hahn (hahn@math.duke.edu) and Lenhard Ng (ng@math.duke.edu), with partial funding supplied by the Duke Office of Undergraduate Education and the Duke Mathematics Department.