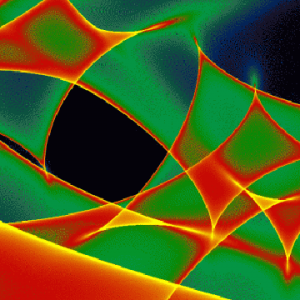 Mathematical physics applies rigorous mathematical ideas to problems inspired by physics.  As such, it is a remarkably broad subject.

Mathematics and Physics are traditionally tightly linked subjects, and many historical figures such as Newton and Gauss were both physicists and mathematicians.  Traditionally mathematical physics has been quite closely associated to ideas in calculus, particularly those of differential equations.  In recent years however, in part due to the rise of superstring theory, many more branches of mathematics have become major contributors to physics.

At Duke, some of the mathematical physics studied is related to geometric ideas.  For example, Hubert Bray uses geometric tools like minimal surfaces and harmonic functions to study gravity, black holes, and the curvature of spacetime. He is also interested in dark matter, which makes up most of the mass of galaxies, and which could just as reasonably be called the "large scale unexplained curvature of the universe."

Mark Stern employs geometry and partial differential equations to study Yang Mills theory, which is both the mathematical model describing the fundamental nuclear forces and a major tool of geometry and topology.