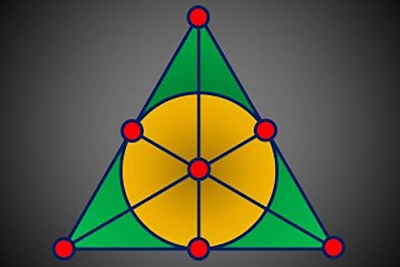 Algebra refers to the use and manipulation of symbols, often with each representing some mathematical entity such as a quantity (think integer or real number), a set with special structure (think group, ring, topological space, or vector bundle) or an element of such a set, or a relation (think function, partial order, or homomorphism). Manipulation of symbols usually follows specified rules that allow for operations such as addition, multiplication, composition, or action of one object upon another. In representation theory, for example, groups act on vector spaces; and in commutative algebra, elements of rings are viewed as functions on spaces.

Combinatorics is the study of finite or discrete structures, such as networks, polyhedra, codes, or algorithms. The structures might have their origins in geometry, topology, computation, data analysis, probability, algebra, or natural sciences such as biology and physics. The overlap with algebra, for instance, is exemplified by number theory, which at its core concerns arithmetic (multiplicative or additive algebraic properties) of the integers (a countable discrete totally ordered set).

Various aspects of algebra and combinatorics are represented at Duke, from geometry to probability, from physics to computation, from statistics to topology, and everything in between.