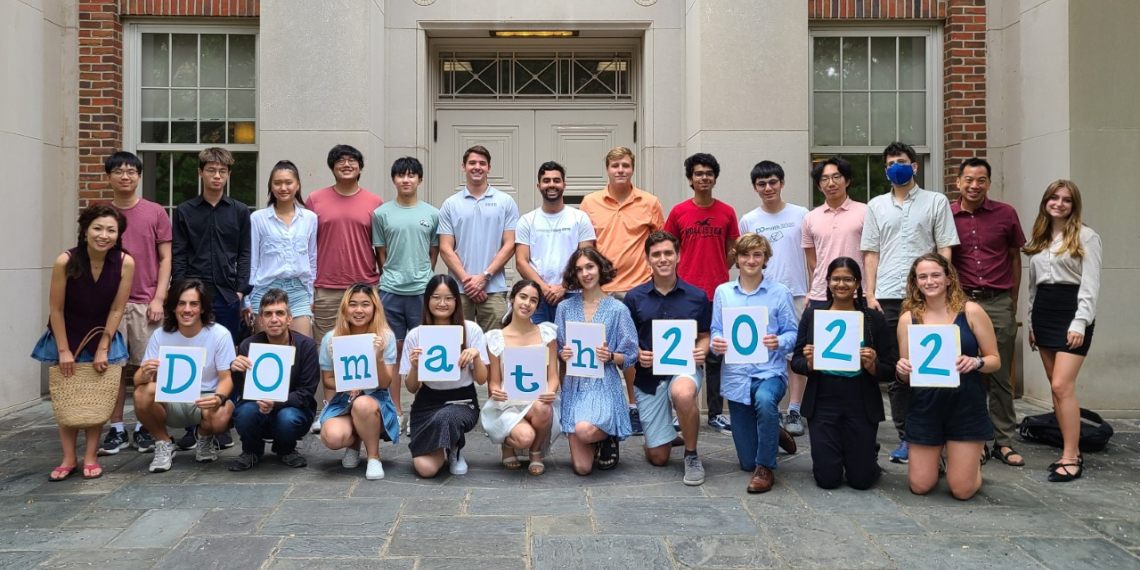 DOmath 2022 runs from May 16 until July 8, 2022. The 2022 program features 6 projects and 21 undergraduate student researchers. Project descriptions are advertisements for the projects and will be replaced once the program is concluded.

Prediction of time series data on graphs has wide applications, including the important problem of modeling epidemic spread dynamics. This project will utilize the neural network model which is a versatile tool for approximating complicated stochastic dynamics, over both time and graph geometries simultaneously. We will start from a review of needed preliminaries of stochastic processes, as well as those of two neural network models: graph convolutional neural network, and LSTM recurrent neural network. These two models have been developed and widely used for graph and temporal data respectively, and we will explore a joint spatial-temporal model. This will provide a neural network tool to model and predict stochastic process data on a graph like a geographic network: we will start our experiment on simulated data, and, time permitting, on real data of COVID cases for which one can compare the performance of neural network models to traditional dynamic and stochastic models.

Structure and stability for Brascamp–Lieb inequalities

Inequalities such as the triangle inequality and Cauchy–Schwarz are indispensable tools in analysis, probability and combinatorics. One obtains a deeper understanding of a given inequality involving vectors or functions by addressing the following questions (each refining the previous):

1) (Sharpness) Are there examples for which equality holds?

2) (Structure of extremizers) If so, can we characterize the class of vectors/functions for which equality holds?

3) (Stability of extremizers) If for a given collection of inputs there is near equality, are the inputs necessarily "close" in some sense to the class of extremizers?

For example, the Cauchy–Schwarz inequality (that the inner product of two vectors is bounded by the product of their magnitudes) is sharp, as shown by considering a pair of parallel vectors. In fact, equality holds if and only if the input vectors are parallel. Moreover, the inequality is stable: if equality holds up to a factor of $1+\epsilon$, one can show that the corresponding unit vectors are separated by a distance on the order of $\sqrt{\epsilon}$.

The stability of many classic inequalities has recently gained a lot of interest in the analysis community. In this project we will explore the stability of Finner's inequality, which is actually a class of inequalities generalizing several better-known ones such as Cauchy–Schwarz and the Loomis–Whitney inequality (the latter bounds the volume of a 3-dimensional body in terms of the areas of its projections to the coordinate planes). In graph theory, Finner's inequality gives a sharp bound on the number of copies there can be of a small graph (such as the triangle) in a large graph with a given number of edges.

We will approach the problem using methods from information theory, in particular the concept of entropy of a probability distribution. Participants will also learn about different ways to quantify the "closeness" of functions using metrics or divergences, and how different metrics/divergences relate to one another.

No prior knowledge of information theory will be assumed. Background in real analysis and linear algebra is ideal. Some background in graph theory may be useful but is not necessary.

In this project we will build and analyze simple mathematical models to understand the spread of covid. The first topic is a paper that is waiting to be written. The second and third are less precisely formulated questions. More questions arise in the news everyday.

1) The phrase herd immunity is often in the news but in an epidemic model with a heterogeneous population it is not just one number.

2) Why do new variants crash in frequency after 3-4 months? This is strange since population genetics predicts the fitter strain will take over the population.

3) With a significant fraction of individuals refusing to get vaccinated, it is predicted that covid will become endemic (persisting in the population like the flu).  What will this look like? Some speculate that 50-100 thousand people will die a year.

A knowledge of probability at the level of Math 230 is useful to understand model formulation, but much of our work will involve ordinary differential equations that we cannot solve in closed form, so it will be good to have team members who are good with MATLAB or who can program. Along the way you will learn something about epidemic models and population genetics along but no prior experience is necessary.

This project will focus on certain types of "minimal surfaces" which are relevant to the geometry and topology of 3-dimensional space. Mathematically speaking, a surface (such as the graph of a function of two variables from vector calculus) is called minimal if small changes to the surface only increase its surface area. First examples include flat planes and catenoids, but minimal surfaces have fascinated scientists for centuries and there is a zoo of clever constructions and intricate examples which you can explore here: https://minimalsurfaces.blog/home/repository/.

In the real world, minimal surfaces and related objects appear as soap films and membranes. Compared to the idealized and very smooth examples found on the above webpage, a cluster of bubbles has a more complicated local structure where three faces may collide, meeting with 120-degree angles along arcs and circles called singularities. These triple intersections violate the traditional definition of a surface, but you could call this sort of thing a "mod 3 surface". Mod 3 minimal surfaces are less explored and part of this project will focus on investigating new examples with special symmetry using computer simulation.

For a whole number p, one can generally consider mod p minimal surfaces where films are allowed to collide p sheets at a time along circles. Bubble clusters never exhibit this structure for p>3, but sometimes the "topology" of the 3-space they inhabit necessitates this sort of singularity. We will also explore this situation, pondering what sorts of examples might exist within "lens spaces" which are quotients of the 3-sphere by certain group actions.

Good background for this project includes vector calculus and differential equations. More knowledge in geometry and topology could be useful, but by a process called stereographic projection, all curves and surfaces can be considered within Euclidean 3-space. The most important requirements for success are patience and interest! We will learn how to use a program called Mathematica to create and visualize our surfaces, with no prior experience required. If there is time (and interest) we can also work on the differential geometry and topology of mod p surfaces using ideas from partial differential equations and complex analysis.

Modeling the dynamics of filter fouling

Membrane filters are used to separate-out impurities in a wide range of applications (including face masks, air conditioning systems, industrial processes and biomedical systems). For the problem of impurities carried in water droplets in the air, there are many important questions regarding the interaction of the drops with the filter geometry and how that controls where the impurities will be deposited on the filter as the droplet evaporates away.

For liquids spreading on flat surfaces, an example of this is the well-known "coffee ring effect", but under different conditions, other types of debris patterns can occur. Building on background from differential equations, multivariable calculus, and basic mechanics this project will explore how effects like rates of diffusion, evaporation, and contaminant deposition interact to determine the distribution of impurities in filters. Computational codes for solving partial differential equations will be developed to examine the potential for clogging of pore channels with different geometries.

The concept of subspace of a vector space comes up in a wide range of fields. It arises as principal subspaces of a data matrix, invariant subspaces in spectral theory, Krylov subspaces in numerical linear algebra, and model subspaces in approximation theory. Much work has been done in subspace learning or estimation, but less is known about how such subspaces vary with the underlying problem, which raises questions of subspace prediction and robustness. Consider a problem that depends on some parameters or evolves in time; the corresponding subspace also changes. This leads to a mapping from such variables to subspaces. Studying subspace-valued maps has applications in reduced order modeling, data-driven dynamics, parameter reduction, and subspace tracking.

A desirable property of subspace-valued maps is smoothness, which allows for efficient approximation. The main goal of this research project is to find conditions and levels of smoothness for such maps. For subspaces computed as invariant subspaces of Hermite matrices, one can show—by perturbation theory for linear operators—that smoothness is guaranteed if the corresponding group of eigenvalues is separated from the others. This result applies to techniques including principal component analysis (PCA) / proper orthogonal decomposition (POD), dynamic mode decomposition (DMD), and variants. Other methods of interest include balanced truncation, Krylov subspace methods (esp. rational interpolation), and active subspace methods.

We will start by understanding the smoothness result for principal subspace-valued maps, then work on smoothness results for other types of maps. It is also desirable to show sensitivity (i.e. rates of change) of these maps. Prior knowledge that may help with this project includes linear algebra and matrix theory, perturbation theory, and/or programming.