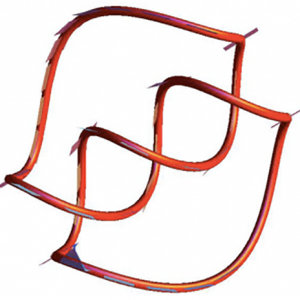 Topology is the study of shapes and spaces. What happens if one allows geometric objects to be stretched or squeezed but not broken? In fact there’s quite a bit of structure in what remains, which is the principal subject of study in topology.

The modern field of topology draws from a diverse collection of core areas of mathematics. Much of basic topology is most profitably described in the language of algebra – groups, rings, modules, and exact sequences. But topology has close connections with many other fields, including analysis (analytical constructions such as differential forms play a crucial role in topology), differential geometry and partial differential equations (through the modern subject of gauge theory), algebraic geometry (for instance, through the topology of algebraic varieties), combinatorics (knot theory), and theoretical physics (general relativity and the shape of the universe, string theory). In addition, topology can strikingly be used to study a wide variety of more "applied" areas ranging from the structure of large data sets to the geometry of DNA. Many of these various threads of topology are represented by the faculty at Duke.