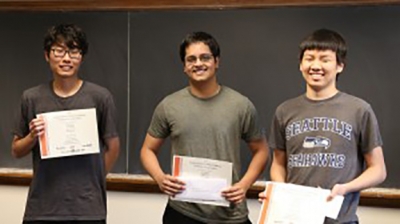 The team of Duke University students Vinit Ranjan, Junmo Ryang and Albert Xue was designated Outstanding in the 2019 Interdisciplinary Contest in Modeling (ICM) for their submission Time to Leave the Louvre: A Computational Network Analysis.  For the past four decades, thousands of teams of three undergraduates from around the world have been invited to choose one of a few open-ended problems to write up and submit their solution within 96 hours.  This year 11,262 teams representing institutions from fifteen countries/regions participated in the contest.

The problem this Duke team chose was to develop plans for emergency evacuation of the Louvre, the world's largest museum at 652,00 square feet, visited by 8 million people each year.  This involved developing a model that explore options to evacuate visitors from the museum, while also allowing emergency personnel to enter the building.  If their 12 policy recommendations are implemented by trained museum personnel, they estimate that the museum could be evacuated in 24.34 minutes.

For all the problems in this contest, teams searched for pertinent data and grappled with how phenomena internal and external to the system needed to be considered and measured.  The student teams produced creative and relevant solutions to these complex questions and built models to handle the tasks assigned in the problems.  The problems required data analysis, creative modeling, and scientific methodology, along with effective writing and visualization to communicate their teams' results in their 20-page report.

The Duke team received the Outstanding designation and also won the Leonhard Euler Award for especially creative and innovative modeling.  This award comes with a $9000 scholarship to be split among the team members.  Our students were one of seven teams to receive outstanding recognition for their submission to Problem D.  While many Duke teams have excelled in this modeling contest in the past, this is the first Outstanding paper in over 10 years.