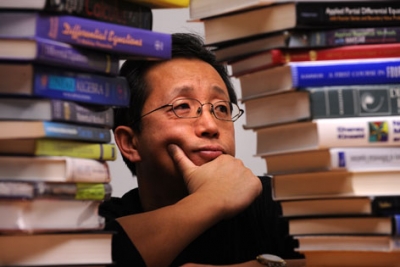 Working in the fields of computational and applied math, new math faculty member Hongkai Zhao develops models and algorithms that can solve problems in science and engineering.

Much of Zhao’s recent work has focused on inverse and imaging problems, which have direct applications for medical technologies such as CT scans, MRI scans, ultrasound, optical tomography and radar imaging. Based on different physical models and imaging modalities, the goal is to construct images or infer desired biomedical information from the obtained measurements.

One of Zhao’s focuses is developing, improving and analyzing the algorithms involved in the imaging pipeline. In practice, small perturbations in measurement can lead to large differences in the imaging results. By making more efficient algorithms and exploiting redundancy in the measurements, Zhao’s work can lead to more accurate images in less time, reducing radiation doses and exposure.

Another of Zhao’s specialties is numerical methods for partial differential equations, which are essential to mathematical modeling in the physical sciences. In particular, their applications in material science, quantum chemistry, climate modeling and geophysical explorations offer exciting possibilities. One of Zhao’s algorithms for calculating distance functions, the fast sweeping method, is already being used in VLSI integrated circuit design.

Zhao has also done work on 3-D shape modeling and analysis, which has applications in constructing, recognizing and comparing objects. One challenge for shape recognition and comparison is that two intrinsically identical shapes can be represented or embedded in 3-D space in various ways, making them look completely different—like the same person in different poses, for example. An important task is to resolve ambiguities and align the objects under a non-rigid transformation. Zhao’s recent work proposed efficient algorithms based on mathematical models of isometric transformation, which keeps distance on the surface of the objects the same, and novel feature space for non-rigid shape matching.

In harmony with this work, Zhao has recently been exploring the fundamental complexity and limits of extracting information from high dimensional data and signals. Combining insight from multiscale physical computation, inverse problems around imaging and ideas from machine learning, he has informed questions in astrophysics and learning in physical systems.

Prior to joining Duke, Zhao was the Chancellor’s Professor of Mathematics and Computer Science at the University of California, Irvine (UCI). He earned his B.S. from Peking University (China), his M.S. from University of Southern California and his Ph.D. from UCLA, all in mathematics. He was also the Gábor Szegő Assistant Professor at Stanford University before joining UCI, and has received the Sloan Research Fellowship (2002–2004), Feng Kang Prize for Scientific Computing in 2007 and Chang-Jiang Guest Professorship at Peking University in 2009.