Leaving the Louvre - How to get out fast 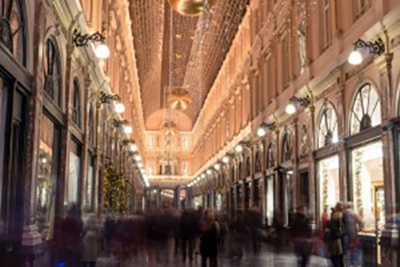 If you’ve ever visited the Louvre in Paris, you may have been too focused on snapping a selfie in front of the Mona Lisa to think about the nearest exit.

But one Duke team knows how to get out fast when it matters most, thanks to a computer simulation they developed for the Interdisciplinary Contest in Modeling, an international contest in which thousands of student teams participate each year.

Their results, published in the Journal of Undergraduate Mathematics and Its Applications, placed them in the top 1% against more than 11,000 teams worldwide.

With a record 10.2 million visitors flooding through its doors last year, the Louvre is one of the most popular museums in the world. Just walking through a single wing in one of its five floors can mean schlepping the equivalent of four and a half football fields.

For the contest, Duke undergraduates Vinit Ranjan, Junmo Ryang and Albert Xue had four days to figure out how long it would take to clear out the whole building if the museum really had to evacuate — if the fire alarm went off, for instance, or a bomb threat or a terror attack sent people pouring out of the building.

It might sound like a grim premise. But with a rise in terrorist activity in Europe in recent years, facilities are trying to plan ahead to get people to safety.

The team used a computer program called NetLogo to create a small simulated Louvre populated by 26,000 visitors, the average number of people to wander through the maze of galleries each day. They split each floor of the Louvre into five sections, and assigned people to follow the shortest path to the nearest exit unless directed otherwise.

Their model uses simple flow rates — the number of people that can “flow” through an exit per second — and average walking speeds to calculate evacuation times. It also lets users see what happens to evacuation times if some evacuees are disabled, or can’t push through the throngs and start to panic.

If their predictions are right, the team says it should be possible to clear everyone out in just over 24 minutes.

Their results show that the exit at the Passage Richelieu is critical to evacuation — if that exit is blocked, the main exit through the Pyramid would start to gridlock and evacuating would take a whopping 15 minutes longer.

The students also identified several narrow corridors and sharp turns in the museum’s ground floor that could contribute to traffic jams. Their analyses suggest that widening some of these bottlenecks, or redirecting people around them, or adding another exit door where evacuees start to pile up, could reduce the time it takes to evacuate by 15%.

For the contest, each team of three had to choose a problem, build a model to solve it, and write a 20-page paper describing their approach, all in less than 100 hours.

Duke professor emeritus David Kraines, who advised the team, says the students were the first Duke team in over 10 years to be ranked “outstanding,” one of only 19 out of the more than 11,200 competing teams to do so this year. The team was also awarded the Euler Award, which comes with a $9000 scholarship to be split among the team members.